During the spring of 2020, Dr Rose Stremlau and Dr Courtney Lewis were supported by the Justice, Equality, and Community Initiative at Davidson College and the Andrew W. Mellon Foundation to organize a series of in-person panels on the Davidson College campus focused on the work of Indigenous “foodpreneurs” in the food sovereignty movement.

When the Covid-19 global pandemic reached the United States, these panels were moved online. After these panels had concluded, Rose and Courtney pursued funding for an additional series of videos.
These videos are aimed at a general audience and feature a spectrum of North American Indigenous chefs. These chefs showcase one dish while discussing the impact that the global pandemic as had on their work, how they are helping their communities during this crisis, and what viewers can do to help Native Nations who have been hit hardest by this virus.

The first panel (in-person) featured Blake Jackson (Choctaw Nation of Oklahoma citizen; Policy Officer and a Staff Attorney for the Indigenous Food and Agriculture Initiative at the University of Arkansas) and Zena Wolfe, and Autumn Sunshine Tahquette, and Virginia Wolfe (all Eastern Band of Cherokee citizens) of the The Hungry Wolf Deli & Fresh Market. 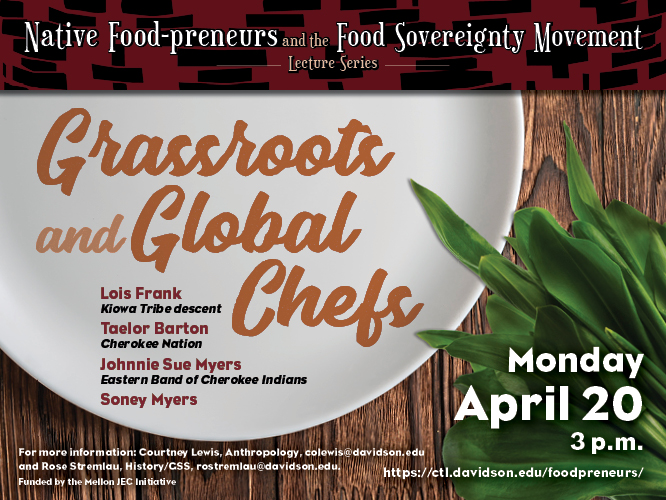 This series brought together chefs from across North America to discuss pressing issue in food sovereignty and food-related businesses during the global pandemic. To bring awareness to these issues in Indian Country, they demonstrated either live or through video some of their favorite spring dishes while answering viewer and interviewer questions.